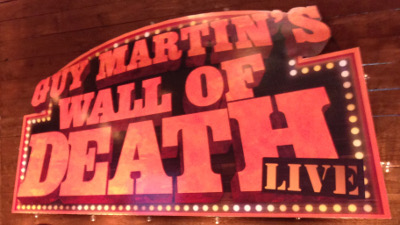 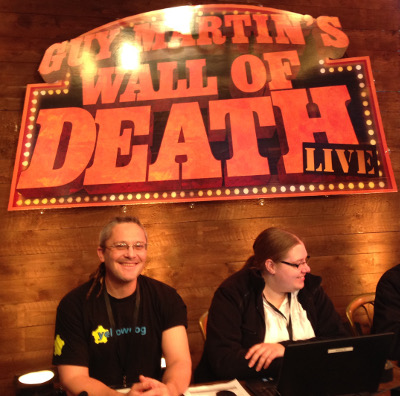 Wall of Death World Record: Guy Martin sets the new world record for the fastest wall of death, clocking a speed of 78.15mph (125.77 kph). The live show was broadcast on Channel 4 on Bank Holiday Monday on 28th March. Yellowcog were there to monitor Guy and the g-forces he was subjected to. If you don’t know what a wall of death is then keep reading!

So what is a wall of death? Wiki describes it best but simply put it is a vertical cylinder large enough to ride a motorbike around the interior wall. The bike can ride on the vertical wall due to what we experience as centrifugal force. The reality is that the bike wants to go flying off in the direction it is currently travelling but the wall keeps getting in the way, curving the bike’s path around and around. Anything over a few g is enough to stick to the wall. We were taking 100 g-force samples per second so could see how the reality met the physics in this giant science experiment.

The wall was made by upending 47 full-sized shipping containers and arranging them into a circle. The containers were then clad in tons of wood to form a smooth riding surface. In order to get on the wall in the first place there is a 45 degree ramp all the way around. This ramp is used to get up to speed before moving up onto vertical section.

It was a great bit of television, combining fun and danger in equal measures. Guy Martin is always good to listen to, as he calmly describes what he is about to do while everyone else looks on wincing at the thought. We can reveal that Guy Martin’s calm exterior is no act. We were able to see his heart rate in real-time and we could see that as he stood waiting to get on his bike before setting off on his first attempt his heart rate was as low as 60 beats per minute! Many people do not have a resting heart rate that low but Guy was on live TV and getting ready to do something that could easily injure him.

Yellowcog were stationed both on the media platform and in the centre of the wall. It was great to be surrounded by Guy’s family and friends and to see their reaction each time he went up on the wall. Guy’s girlfriend Sharon was excited and nervous in equal measure but after each run Sharon would ask “How fast?” and “What’s his heart doing?” 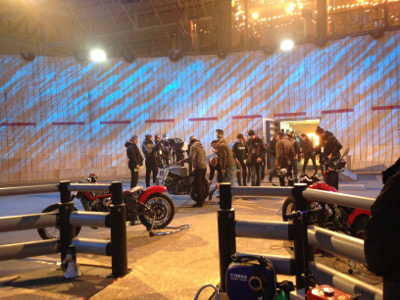 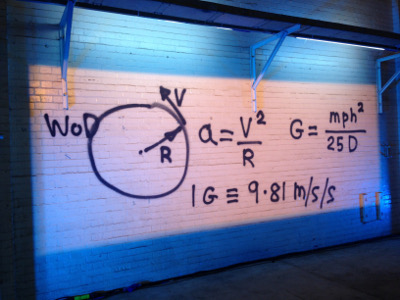 The data we collected (and which was shown on screen) was remarkable – seeing it live with a man on a motorbike whizzing around the wall two foot away brought a sense of urgency to it all too. As expected, Guy’s heart rate and breathing increased to match the exertion of riding under such g-loads but we could also see that on each subsequent run on the wall he was relaxing into it and his peaks were reducing – apart from the record breaking run! On the record breaking run the peak while on the wall was as the previous run – but after he began to slow down there was an unexpected but very noticeable increase. Guy knew he had nailed it on the run and the psychological impact was visible physiologically.

The show was produced by North One TV. We have worked with them before (on the Isle of Man TT Challenge) and they brought a level of enthusiasm, teamwork and professionalism that other companies, other industries, would die for. The project itself was huge. 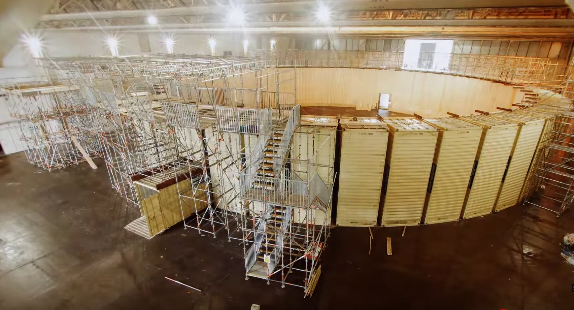 The construction of the wall is the most obvious manifestation but to stage something like this there are so many logistical problems to overcome. I think a good comparison is live sport but there the venues come complete with media areas and facilities; the wall of death however was built in an empty hangar and every single piece of equipment from our small part to the outside broadcast trucks to the lighting rigs and the on-screen talent had to be brought in and combined. The months of preparation finally came together on the day and although people were stressed, the atmosphere was like a festival – lights and sounds and excited people buzzing about! It was an unforgettable experience and yellowcog is proud to have played a part.